The Board of Directors of BNP Paribas met on 12 February 2014. The meeting was chaired by Baudouin Prot and the Board examined the Group’s results for the fourth quarter and endorsed the 2013 financial statements. 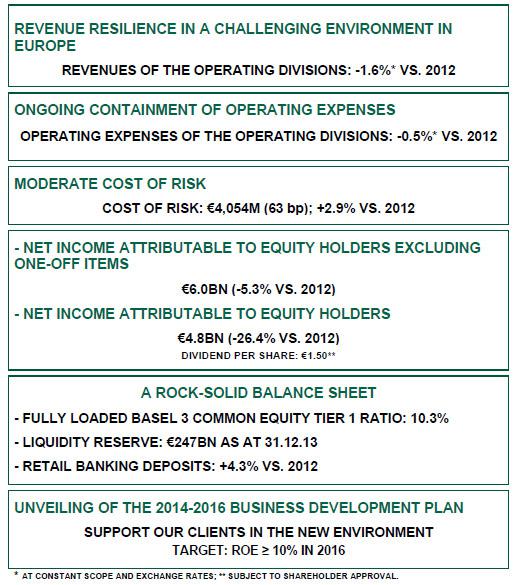 The Group’s operating divisions held up well in 2013 in a lacklustre economic environment in
Europe.

Thanks to a diversified business and geographic mix, the operating divisions confirmed the good resilience of their revenues (-1.6%(1) compared to 2012): revenues were stable (1) at Retail Banking (2), up 3.8% (1) at Investment Solutions, and down 8.3%(1) at Corporate and Investment Banking (CIB). Operating expenses, which totalled 26,138 million euros, were down 1.5%. They include this year the impact of the one-off 661 million euro Simple & Efficient transformation costs (no impact in 2012) and the effect of the appreciation of the euro. The operating expenses of the operating divisions were down 0.5% (1), reflecting the ongoing containment of operating expenses, with a 0.8%(3) decline for Retail Banking (2), a 2.2% (1) increase for Investment Solutions and a 2.4% (1) decline for CIB.

The Group’s cost of risk was at a moderate level, at 4,054 million euros, or 63 basis points of
outstanding customer loans. It rose by 2.9% compared to last year due in particular to an increase at BNL bc as a result of the still challenging economic environment in Italy.

The Group’s financial statements also include this year a 1.1 billion US dollar provision (4), or 798 million euros, related to the retrospective review of US dollar payments involving parties subject to US economic sanctions.

The Group’s balance sheet is rock-solid. Solvency is high with a 10.3% fully loaded Basel 3 common equity Tier 1 ratio (4) and a 3.7% fully loaded Basel 3 leverage ratio (4), above the 3.0% regulatory threshold applicable effective from 1st January 2018. The Group’s immediately available liquidity reserve was 247 billion euros (221 billion euros at the end of 2012), equivalent to over one year of room to manoeuvre in terms of wholesale funding.

The net book value per share (6) was 63.60 euros, or a compounded annualised growth rate of 6.1% since 31 December 2008, demonstrating BNP Paribas’ ability to continue to grow the net asset value per share.

The Board of Directors will propose to shareholders at the Shareholders’ Meeting to pay out a dividend of €1.50 per share to be paid in cash, stable compared to last year, which equates to a 40.8% pay-out ratio.

The Group finally unveiled the broad outlines of its 2014-2016 business development plan.
Confirming its universal bank business model that demonstrated its resilience during the crisis, and which is a clear competitive advantage in the new environment, it defines five major strategic priorities for 2016: enhance client focus and services, simplify the organisation and how the Group operates, continue improving operating efficiency, adapt certain businesses to their economic and regulatory environment and implement business and regional development initiatives by leveraging the Group’s expertise. The goal is to achieve at least 10% return on equity by 2016 and double digit annual growth of net earnings per share (7).

Operating expenses rose by 1.6%, to 6,907 million euros. They include this quarter the exceptional 287 million euro impact of the Simple & Efficient transformation costs (no impact in 2012) and the effect of the appreciation of the euro. The operating divisions’ operating expenses rose by 2.6%(1) due to business development investments at Investment Solutions and CIB as well as one-time effects this quarter.

The cost of risk, at 1,075 million euros, or 68 basis points of outstanding customer loans,
decreased by 10.3% compared to the fourth quarter 2012.

(1) At constant scope and exchange rates
(2) Including 100% of Private Banking of the domestic markets, excluding PEL/CEL effects
(3) At constant scope and exchange rates, net of Hello bank! costs (65 million euros)
(4) See note 3.g in the consolidated financial statements as at 31.12.13
(5) Fully loaded ratio taking in account all the CRD4 rules with no transitory provisions
(6) Not revaluated
(7) On average over the 2013-2016 period, excluding one-off items

View the slides of the presentation

Consult the Financial Stability Board slides

The bank for a changing world